Kate Hall published her book I DID BUT I DON'T ANYMORE with Hesse Press in 2015. Michael Dopp published his book, SWIZZLE, in 2017. The two artists share a birth date of September 6th, and asked LA astrologer Marty Windahl to create a birth chart reading for the two of them.

At a point in the line of time* designated as September 6, 1978 at 10:13pm at a location on planet earth known as Bloomington, Indiana, a soul burst through the fabric of human existence. His parents called him Michael and his family's name was Dopp. Early in his experience of this human articulation (perhaps even as soon as the womb) he would likely have had several formative experiences many of which, when seen from an expanded awareness and an astrological perspective, would have surfaced as echoes of previous lifetimes. When observing the sky under which Dopp was born, we can see that throughout his life there may be an on-going topic of discussion- how to integrate body and soul, heart and mind? There may be frustration present with the limitation presented by both the physical reality and the soul's dependency on it. Breakthroughs are likely to occur at key moments and astrological alignments throughout Dopp's journey on Earth.

With Jupiter at 0 degrees Leo, self-discovery would have likely occurred at quite a young age for Dopp and will continue to be a gratifying exploration throughout his life, unfolding like ripples on water from each discovery dropped in the pool of his consciousness. Learning what his body could be employed to do would also, quite possibly, have been a pivotal moment in the expansion of Dopp's creative understanding. With his Saturn in the sign of Virgo at 5 degrees and his moon in the sign of Scorpio at 6 degrees this may have occurred for Dopp around ages 5 and 6, a time when most children enter some sort of formal education. Along with assisting in solidifying his physical reality, the process of discovering what he could achieve when his time was structured to accomplish certain tasks would have likely been both challenging and rewarding for young Dopp. Though their origins may not be obvious to an outsider, the way these early impressions have come to be expressed through Dopp are likely to be deeply established and apparent. 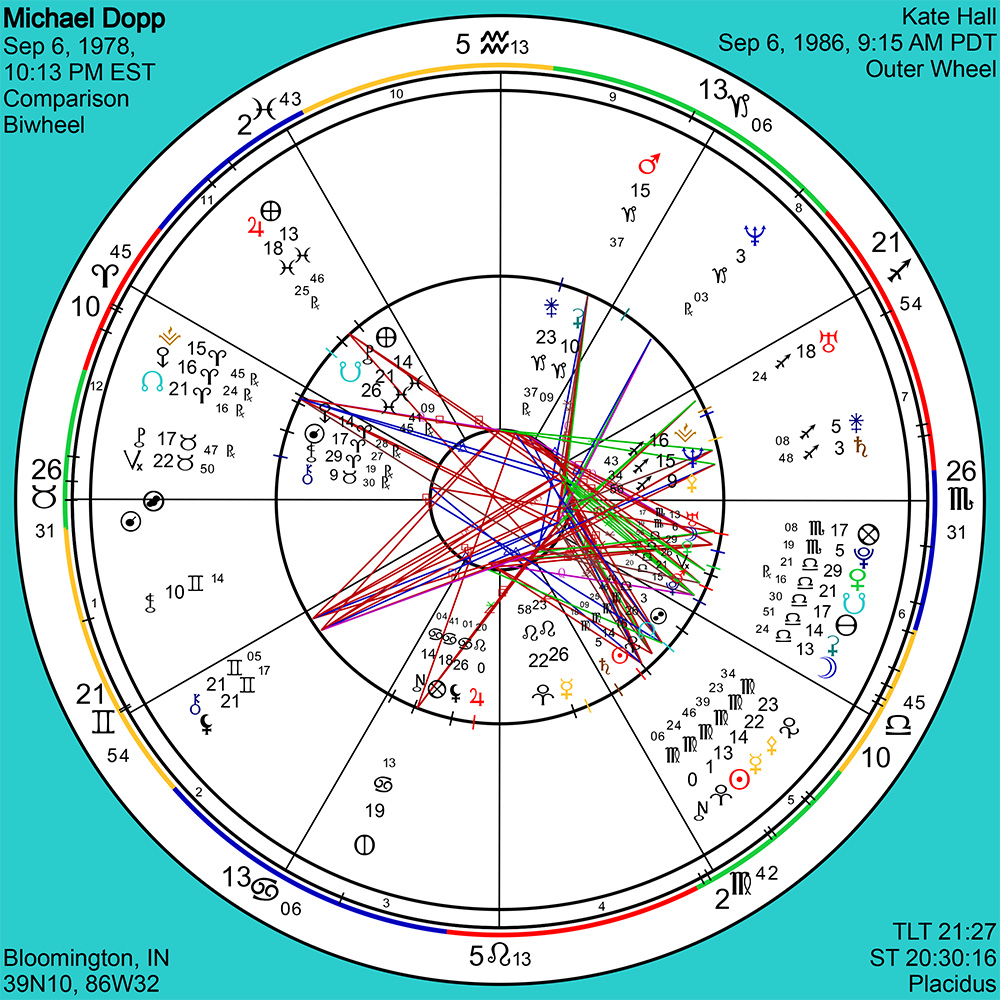 In childhood Dopp may have been described as quite imaginative or inventive. With Neptune in his partnership sector, the 7th house, Dopp would have sought out friendships that assisted him in augmenting his creative landscape. What is not fully digested in our waking life is delivered during REM in the form of dreams. It is possible that Dopp remembered these early dreams but it is more probable that the conscious mind confined them to the realm of sleep given the pain associated with the memory of some of these events and the presence of Chiron in Dopp's 12th house of dreams, among other things. Dopp has likely experienced many lifetimes in which significant events occurred and relationships were formed. In spite of the challenges, with an astrological formation known as a Yod to his south node in Pisces, Dopp's soul was excited to return to the planet and reconnect with many of these associations. The main purpose of these meetings would be to further and transform whatever conversations and collaborations those previous iterations sparked. Perhaps in an early dream Dopp encountered and maybe even communicated with Hall, who had not yet broken through to the earth's gravitational pull.

At a point measured in time* by 8 rotations of the Earth around the Sun to the day after Michael's birth, in the year 1986 at 9:10 am at a set of coordinates called Beverly Hills another soul erupted through this time-space continuum. Her parents called her Katelyn, though most would come to know her as Kate, and her family's name was Hall. Given the position of the stars and planets at the time of her birth, one might say that Kate Hall was born fully articulated. It is probable that while still in the womb during moments of rest or contemplation her parents were already impressed with Hall's essence. A Libra moon hovered over her left shoulder gifting her with an intuitive knowledge of justice, balance, beauty and fairness. It is likely that even before she was received into the arms of her mother and father, a conscious awareness had already developed; an understanding that what Hall desired was received through her mother. There may have been a sense that Hall and her mother were birthing her together, that this was a joint venture, a handshake. This strategy of combating challenge with collaboration is a thread that may continue to roll like a ball of yarn through Hall's adulthood. 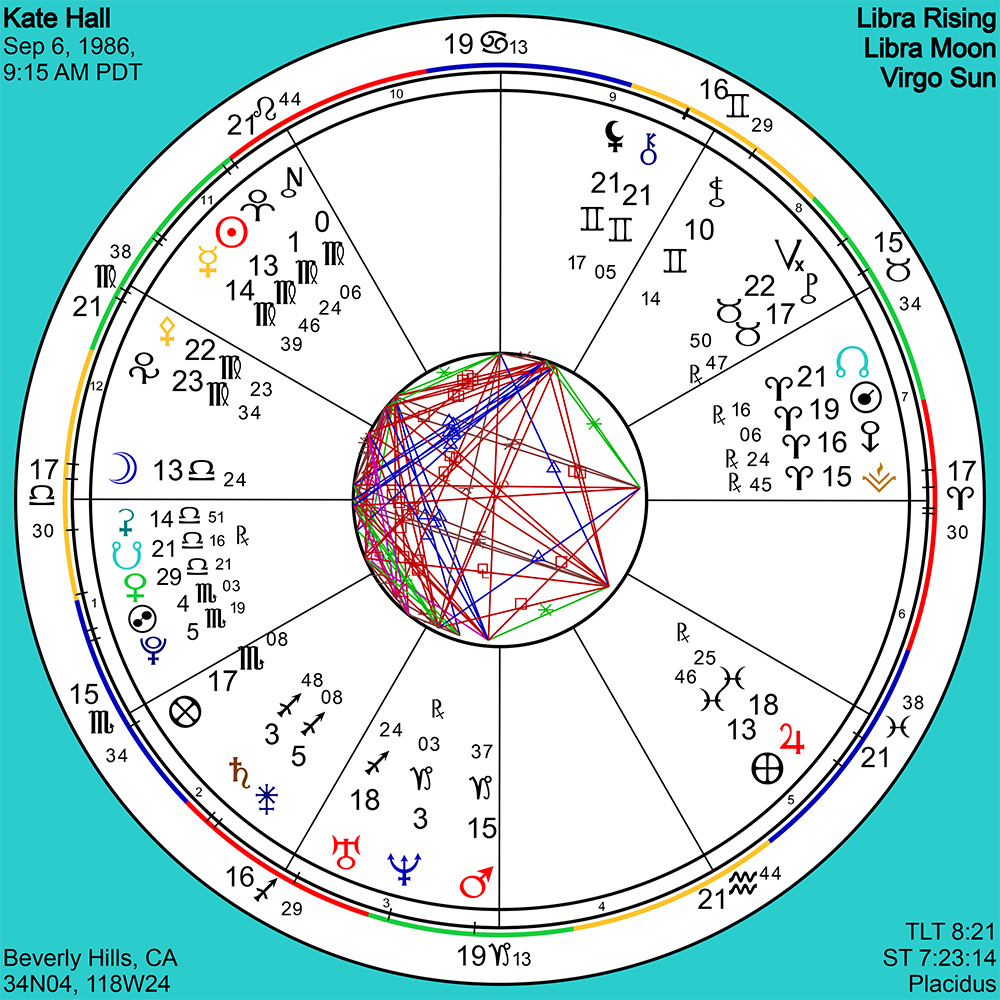 Perhaps while still in the womb and fully cognizant of the world that held her, Hall had already begun distinguishing tastes for certain foods or music. She was rediscovering or igniting what she required in order to establish the sense of harmony and beauty she probably would have strived to develop in previous lifetimes. With Venus at 29 degrees Libra, just a stones throw away from the moon's south node, Hall almost certainly went (in previous incarnations) and will continue (in this lifetime) to go far in the assertion of her own unique visual perspective and language.

For Hall it was likely around puberty that she began to feel the snap of her own personal power. With a Sun-Mercury conjunction in the sign of Virgo in her 11th house of friendship, hopes and dreams, it would have been about this time that Hall may have had the revelation that, with a sharp wit and cosmic timing, she possessed a sense of humor that was not only an attractive force, with the potential for making her popular among her peers, but also allowed her to go far in the formation of friendships that would bolster a growing feeling of creative possibility and freedom. With these tools and alliances, Hall will likely continue to explore and push the boundaries of artistic realization throughout her life. For Hall the questions activated by the conversations between the planets and stars in her natal chart might be: What is one person capable of achieving? What more is possible when that person meets with another? What occurs through initiation and what occurs through reflection?

At some point along the intersecting planes of time and space, Kate Hall and Michael Dopp's paths also crossed. There are many ways this meeting may have been represented. Perhaps at first there was a lack of recognition like watching snow fall outside a window, you forget the flakes. While there may have been little initial acknowledgement, one of the two, possibly Dopp, found the other compelling enough to make introductions. This may have occurred, after, in true Virgo fashion they each witnessed what the other was capable of. Once the surface is scratched it will be difficult to back away from the depth available to these two Mercurial souls. The seed of their interactions likely held a cheerful and gregarious impulse to explore latent innovations through their connection. Each easily understands the modes of the other's individual expression. With Pluto being activated by planets in both charts, there exists a comfort and familiarity within this relationship indicating a link that was likely made lifetimes ago. As such there is always an opportunity to go deeper, to take the stairs in this collaboration. If this is at times overwhelming there is always the option, such as at the landing of a staircase, to rest or even to exit at whatever level of expression and development has been achieved through their alliance.

Already by accepting the rewards of this partnership they have agreed to pass through any difficulty inherent in this generative connection. Like gold miners there will likely be a process of excavation required. Both individuals are familiar with the journey between imagination and realization, the ways in which the imagination may augment or distort what is possible in physical reality. However, both parties may employ divergent approaches and tools in tackling the adventure of artistic realization. Halls expression may be more conversational, lending an ear to both the dream and the reality and at times blurring the two to the point where it is difficult to determine whether the work had its origins in a corporeal tangibility augmented by her vision or whether the apparition was curtailed by physical constraints. Dopp, on the other hand, with natal Sun squaring natal Neptune, may see this intrinsic conflict and prefer to chisel and refine both reality, based on his vision, and at other times, conceding to the boundaries of reality, allow them to inform his dream. 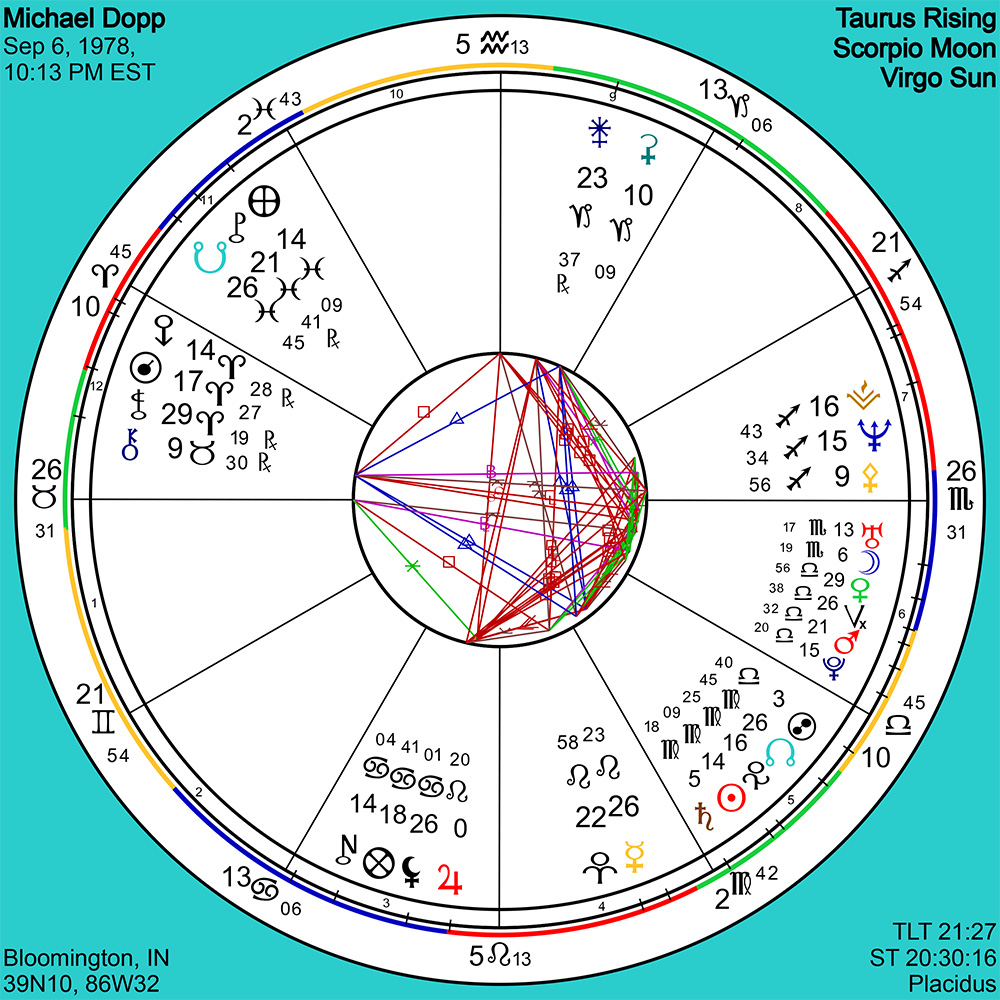 Given Dopp's Neptune placement in a hard angle to Kate's Mercury, what can also be said of this collaboration is that the two may communicate best through visual language and humor. Direct communication can at times get lost in the fog of a more nuanced, intuitive understanding of one another and what each artist desires to communicate through their artistic renderings. Besides their natal Sun conjunction, Hall and Dopp share Venus at the exact same degree, another harmonious representation of this creatively abundant partnership, a planetary alignment suggesting the two share a similar aesthetic appreciation. Ideally it would be easy for the two to come to an agreement on the final desired outcome, as their appraisal would be similarly defined. Hall's Sun in sextile to Dopp's Uranus suggests that she may encourage him to venture outside his habitual impulses to explore more inventive expressions. While Dopp's Neptune in sextile with Hall's Ascendant implies a non-judgmental attitude towards Hall, an approach that may give her the freedom to interpret her creative impulses in a more relaxed manner.

While many possibilities are indicated by this artistic partnership, no definitive conclusions can be made. What is evident however, is that beneath whatever humor or disarming qualities apparent in Hall and Dopp's work, there is something powerful and mysterious at play in this collaboration, one collision in a vast sea of potentialities.

*As we on Earth currently understand it